Songwriter / Poet Juliana Howard on the truth of signs, and the lifelong task of moving on 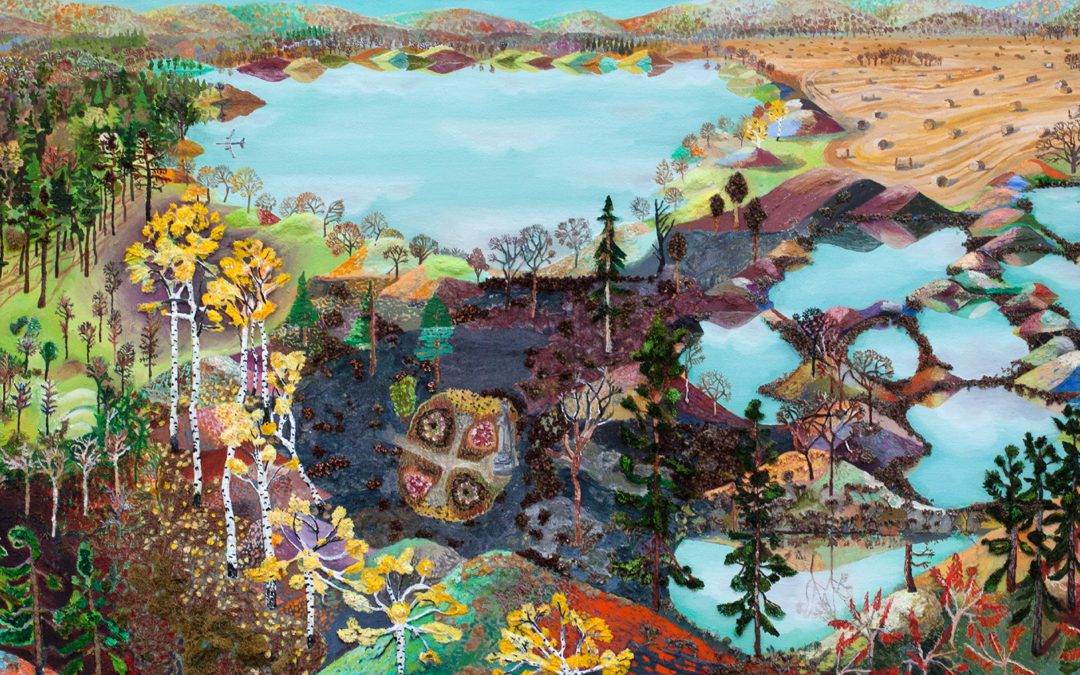 Unwind taut mind.
Leave all behind.
Your true self find.
—Juliana Howard

Integrity comes, says inspirational author Alan Cohen, “when the life you are living on the outside matches who you are on the inside.”

In 2010, songwriter and poet Juliana Howard published Catie the Copycat. The story, beautifully illustrated by her granddaughter Sophia Heymans, introduces readers to a child searching for external approval, who comes to understand that her own uniqueness—the truth inside her heart—is the source of her beauty and her strength.

She had written that story twenty years earlier as an insight gleaned from a retreat experience. Then she tucked it away while she focused on writing music for and directing the children’s singing group, The Crayons, who from 1986-1999 performed throughout central Minnesota and beyond, and even toured to Washington D.C.

World Library Publications’ website says that Juliana Howard’s “music for children…conveys messages of love, peace, understanding and compassion, as well as fun. Her songs present scriptural truths and solid teachings about self-esteem through energetic rhythm and movement that both enlighten and entertain.”

When her granddaughter Katie (Howard) Dunnivant spent time as a student in Chile, she sent Juliana these lines from a Pablo Neruda poem:

The poem, written in Spanish on a thin board, served Juliana as a kind of sign. She was struck by Neruda’s line, “You are the Queen,” because she had written that same line into her story. Like a postcard arriving from her true self, Neruda’s poem from her granddaughter made clear it was time to let that little story, which she dedicates to her grandchildren, move out its dark closet and into the world, to live there and shine its light.

“Grandma Juliana is one of the most independent people I know,” Sophia Heymans wrote to me. Sophia was an art student at the prestigious Rhode Island School of Design (RISD, pronounced Rizdee) when she worked with her grandmother’s poem to illustrate Catie the Copycat. Now she’s a professional, full time artist, living in Brooklyn. She credits Juliana’s influence for the courage to follow her dreams.

“She is shamelessly herself and it is a powerful thing to witness. She normalized thinking outside the box and trusting in yourself and the universe. I’m sure this helped lead me to my life as an artist.”

The story of Catie the Copycat is meant to remind Juliana’s grandchildren, and everyone who reads it, of the unique beauty of the true self, which is often the hidden self, obscured by the self-important ego. Recently, the story has also become Juliana’s reminder from her inner self, the Queen, that we’re never done facing our fears, that as long as we are living, there is always some new insight or understanding to birth into the light.

Now in her eighties, Juliana Howard’s poetry practice and her spiritual practices (which often overlap) are helping her face the vulnerabilities created by aging, a process she refers to as unraveling and undoing.

She has been observing, she tells me, in her retired friends and in herself, a “need to spread out our pasts before any willing listener. ‘Look at me and see what I was before the flood of aging washed my past away and left me less to do and say.’” Sometimes this natural and understandable desire—to leave a memorable legacy—makes her feel as if she is “clinging to kudos like a dog with a bone.”

In the process of facing her fears and her truth, she recently wrote this poem, a testimony to the indomitable spirit of the inner Queen who will not let the fear of her own unraveling stop her from becoming more and more authentic.

The shame of seeing how I come across,
the loss of my persona polished
to perfection all these years brings tears.

It seems too much to bear.

Without the solace of the morning sun
I am undone.

what if this undoing is the miracle
I’ve waited for? What if I then find that
taut restraints unwind a bit if I be still?

what comes of it.

Signs and the Lifelong Task of Moving On

In Jungian psychology, the shadow self is made up of all the unappealing characteristics, feelings, and responses that we repress. To appear conventional, respectable, or “normal,” we hide all the scary bits of our true self—our weakness and vulnerability, our pettiness and meanness, and even our singular power or beauty. We hide our true self from others to better fit into society’s conventional molds, and we hide the truth from ourselves to simplify our own self image, to reassure ourselves that we are a certain kind of acceptable person. Some of us want to be known as good and helpful, others want to be known as powerful leaders, or as innovative creatives. And don’t all of us want to be seen as successful?

But the truth is, every individual is a paradoxical mix of opposite tendencies. We heal and destroy. We are strong and weak. We innovate and we fall into habits. To disown aspects of our thoughts, feelings, and behaviors is the opposite of integrity. Self-repression is a self-annihilating process of disintegration that makes us into copycats and scaredy-cats, and makes our world into a place of untruths, half-truths, and hidden truths. And that’s a stifling, cruel place to live.

In my many conversations and interactions with poets over the course of many decades, I’ve found that nearly everyone who writes poems is passionate about the accurate expression of truth.

This is the power of poetry. Living our heartfelt truth, when what we present to the world matches who we are, is transformative. It liberates and heals—ourselves, others, the world.

Thirty-some years ago, when I was young and first falling head over heels in love with poetry, I had the opportunity to hear Joy Harjo, our current national poet laureate, read in Minneapolis at the University of Minnesota. I was a star-struck student, something like a groupie, gaping in awe at this beautiful, nationally known poet and successful musician.

All of her successes, she told us, were insignificant compared to the important work she had recently begun, when she become a grandmother. In her culture–she’s an enrolled member of the Muscogee (Creek) Nation, if you are fortunate enough to be a grandparent, it’s the most critical work you will ever do. Grandparenting deserves your utmost attention, because grandchildren will carry your life with them after they are gone. And then they will pass on your life, along with theirs, to your great-great grandchildren.

This series of Tuesday conversations with poets, is my way of paying tribute to the not-so-famous poets and songwriters quietly living among us, in their communities, with their families and friends, in Minnesota. Poets and lyricists (who are poets working in a specialized form) sow seeds of beauty and truth by their attentiveness to a poetic practice, and I want to shine a light on the important work they do. They awaken us. They encourage us to pay attention to what matters.

This week, my work is easier, because Sophia Heymans is already shining a light on Juliana Howard. She has done this superbly through her painting “Signs in the Woods,” made of mop strings, prairie grass seeds, moss, oil on canvas. Completed this year (2019), “Signs” is a whopping 50″ x 60.” It’s larger than life, like her grandmother.

“I made the painting ‘Signs in The Woods’ thinking of Grandma Juliana,” Sophia told me, “almost like I was trying to do a painting from her perspective. One of the ways Grandma has influenced me is her ability to let spirituality flow effortlessly through her everyday life. We always lived close by Grandma and Grandpa and visited them often growing up, either in Saint Cloud or up at their cabin in Wisconsin. Every time we saw Grandma she always had a new story of some sighting, coincidence/miracle that had recently occurred. Sometimes they were humorous, like having lost something that shows up in an unlikely spot. Sometimes it came in the form of finding natural objects in the woods that are shaped like hearts, crosses, faces. Whatever the circumstance, she has always been open to seeing ‘Signs’ and so they come to her often. Her confidence in accepting those signs as truth gave me confidence to do the same in my life.”

One of Juliana’s children’s songs goes:

Let your light shine! don’t stand in the way,
Light up the world with Love today!

Her purpose these days, in writing and in living, she tells me, is to face her fears, everything that lives reactively in the shadows, and accept the gifts of transformative change—even the gifts that come from unraveling, letting go, and dying. She is determined to trust the process of renewal. It’s a purpose she captures in this three-line poem:

Juliana Howard has galloped through life on the back of her muse. She attributes her grit and gusto to her Montana upbringing. Though raised in Montana, she went to colleges in Minnesota, Carleton and the University of Minnesota. She has performed political and social satire and was featured twice in the Star Tribune. In her 50’s she returned from teaching to devote her time to writing children’s spiritual songs, which were performed locally and nationally and recorded by The Crayons. She now lives in St. Joseph, MN with her husband of 61 years, where she composes poems and teaches English to immigrants.

If you are interested in buying the book Catie The Copycat please send a check for $20 to:
Annie Heymans
29643 95th Ave
Saint Joseph, MN 56374
Insert a note stating that it is for the book or write it on the check in the memo line. Include your address and we will send you a book postage free.

This activity is made possible by the voters of Minnesota through a grant from the Central MN Arts Board, thanks to a legislative appropriation from the arts and cultural heritage fund.