The Lovable Detail: Mike Finley on the happy hobby of poetry 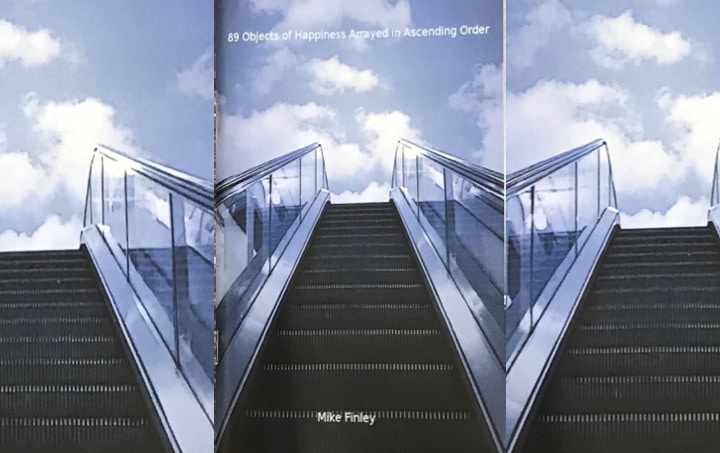 Jerry Seinfeld has a Netflix show called ”Comedians in Cars Getting Coffee.” The premise is, that if you bring two comics together for unscripted talk, and put them in a cool car and then in a coffee shop, you will create some alliterative (c-c-c), thematic hocus-pocus, to turn their improvisational banter into sensible conversation.

But what actually makes the show watchable, is that the host and his guest share a passion for comedy, and a mutual respect for each other’s talent. Conversation around a common passion and mutual respect—don’t we all crave that kind of connection?

This story is about connection. For decades, Mike Finley and I have been on the verge of connecting. We both graduated from the University of Minnesota, both studied English, wrote poetry, knew the same professors and poets. When Gary Snyder read poetry at Weyerhaeuser Chapel on the campus of Macalester College in early 1993, we were both in the audience. But we didn’t meet until late 2019, when we got together at Linda’s Cafe in Rogers, Minnesota over breakfast, to talk about our mutual (and frequently inexplicable) passion for poetry. It could have been the pilot episode of Poets in Booths Getting Pancakes. But we ordered omelettes—stuffed with scallops and hollandaise sauce for him, with turkey and broccoli for me.

Most relationships of long duration are complicated, bringing up feelings of dissatisfaction, even of hatred, as well as pleasant feelings of happiness and love. A lifelong relationship with poetry also stirs up a stew of emotions. Mike Finley has written approximately 10,000 poems. And yet, “There are people who are doing what I do who have been much more successful than me, and I’ve always kind of envied them, with a somewhat angry ‘that should be me’ envy.”

I, too, have noticed that envy creeps in when poetry turns competitive. If we compare poets’ publication credits, prize nominations, and awards—the stuff that typically gets mentioned in poets’ bios—we make a hierarchy of status. Is this person a professional poet? Or is she/he merely a semi-successful, lesser poet? Maybe this is merely an amateur, or, worse, a wanna-be poet.

Competition and envy are among the things I don’t like particularly like about the poetry world. I ask Mike whether he thinks as I do, that competitive poetry is a perversion of poetry.

He tells me competition and envy around poetry “are totally irrational because — what are you envying?” We both laugh heartily. Almost all “successful” poets have invested more cash in the writing workshops, conferences, degrees, and submission fees necessary for building a poetry “career,” than they’ll ever earn back from sales of their poems. And even the most famous poets are not generally recognizable. Stand on a busy corner anywhere in Minnesota and take a survey—who knows the name Kirby Puckett? Practically everyone. Now ask who knows what Robert Bly (a Minnesotan, and arguably one of the most famous poets—nationwide—of the the late 20th Century) is famous for. You’ll get a lot of blank stares and ?????

“I have a very love/hate relationship to poetry,” Mike says. “I hate the preciousness, the falsity, the dreaminess that you think you’re going to be rewarded for all this, for what you’re doing.”

“So what do you think poetry should do?” I ask. “What would you ideally want poetry to be?”

“So what do you think poetry should do?” I ask. “What would you ideally want poetry to be?”

“Well,” he says, “my approach has been, and this is for the last maybe 11-12 years, to have a ratio. If I write something mysterious and spooky, I have to then write a very dear, sweet love poem. It keeps me from getting too mysterious. It’s very important to me to be grounded. “There’s a way in which I don’t want to be a quote-poet-unquote. And by that I’m invoking a stereotype of someone dreamy, sitting under a tree, writing about the sunset. It’s okay for people to do that. I just don’t want to do it. I have a lot of love poems. I also have a lot of creepy ones. Creepy poems about my daughter’s suicide, things like that. But I don’t want to be absorbed in negativity. I want to win my way back into the world with love. I’m not talking about ‘i love you, i love you, i love you’ poems. I’m talking about the poem that shows some lovable detail about something. It doesn’t have to be my spouse. It could be my friend. A tree. But it has to be an encounter with something that’s not myself, something outside myself.”

Isn’t that essentially what authentic love is, getting outside ourselves?

In his book, Flow: The Psychology of Optimal Experience, Mihaly Csikszentmihalyi describes flow as “a state in which people are so involved in an activity that nothing else seems to matter; the experience is so enjoyable that people will continue to do it even at great cost, for the sheer sake of doing it.” Hobbies are one of the primary activities that take people into a state of flow.

The IRS says that an activity on which you spend more money than you make, is not a business or profession. It’s a hobby. According to IRS standards, most poets, no matter how “enviable” their successes, are hobbyists. There is something sweetly beautiful about a passion that simply cannot be made into an enterprise.

I ask Mike what he’s writing these days. “I don’t write many spooky things anymore,” he says. “I went through a very sad period after my daughter died. It lasted for years. And then, when I was young, in my twenties, I liked macabre things. That was also the ‘70s, so there was a taste for the gothic. A lot of the surrealist poets were touching all these gloomy notes, and I got swept up in it as a very young man. But then, when true sorrow overtook me 10 years ago, I didn’t want to go back and be like that. Even in my grieving I wanted something…better. I used my grieving and writing to slowly climb the stairs out of my hatred and bitterness.”

And yet, poetry isn’t the same as keeping a journal. Poets use tools and techniques to shape their writing, to make a little thing—a word-object—called a poem. While Mike Finley may not think of his poems as art, he has decades of experience honing the craft of poetry. His poem, “Teaching My Dog to Read,” plays with repetition, alliteration, and rhyme in the subtlest way, before tickling the reader with its feather-light, ironic wit.

It has been a slow process,

her eyeing the page,

then licking the page,

then looking up at me.

It does not help that she cannot say the sound,

not having the proper anatomy.

Still I’m patient we will get to that in time.

Because when you love someone,

and you know that they love you,

you want them to read your books.

This poem delights me for the complexity hidden in its simplicity. It is simultaneously true, funny, poignant, and surreptitiously skillful. But these days, when Mike Finley writes, he thinks more about the oral and aural performance of a poem than about what it looks like on the page.

“The page is like sheet music,” he tells me. “It’s a key to something good. But it’s when you speak it, the vibrations go into the air and it hangs there for a second, that’s when it’s cool for me.”

“That’s true,” Mike says. “And if you’re competitive, all those people are the enemy.”

“Are you competitive?” I ask.

He tells me he has a lot of friends, people he calls noble, who have seen his wife and him go through a lot of tough things. He can count on them to show up at his poetry readings. “And it’s very sweet to read just to them. But, they’re also my friends, so I get to sit and talk to them and be friends with them. It’s not just the poetry. It’s very kind of them. I don’t think they’re really poetry people by any stretch, but they come to my stuff.”

Because he reads so often in public, he doesn’t think about poems on the page anymore. “I think about how is this going to sound in the air. Does this go on too long? I usually stay under 16 lines, and they’re not really lines. Because my unit of writing is the sentence, is not like a sonnet that has 14 lines.”

I find it interesting that his form has become the sentence. One of my very favorite books is Annie Dillard’s The Writing Life (1989). In it, she tells the story of a fellow writer who was asked by a student, “Do you think I could be a writer?” The writer responded by asking, Do you like sentences?”

Before he retired, Mike made his living constructing sentences. “Editing, writing copy, ghost writing, being a journalist,” he says. “I fed my family and kept a roof over us, just by being a professional writer. I’ve written like 1000 websites for law firms. But all this hack work really has helped me to think about, ‘How do I have impact immediately?’ So I don’t want to warm up the reader, I go right to the thing, I make the sell (in advertising copy you’ve got to make the sell), and it’s more dramatic. The old thought about poetry, is that you work toward this passionate last line—you see this, you see this, you see this…. aaahhh. That’s the format for the Chinese poem from the 8th century.”

He tells me about his friend, the writer Danny Klecko with a tattoo on his arm that says, “See, see, see, sigh.” That’s his format for writing a poem. Whenever he gets lost in the writing of a poem, he can easily find his way through. The format is on his forearm.

About his own writing process, Mike Finley says, “I start with a story or a thought, and if I think, ‘I can give this to people,’ that’s good. If it’s dour, and it just points out the spider webs in my soul, I can it. I don’t want to make anybody’s life worse than it is. I’m an old man. I’m going to be 70 in July. I’ve got a terminal illness. I don’t want to be a bummer to people. It’s even vainglorious to say that, because I’m only connecting with a couple dozen people. But, yeah, it’s my mitzvah. I want to be a positive figure. I say I’m positive, but I think most people would say I’m funny. My stories have irony, and they turn on syllogisms in your head and make you contemplate the irrational. I enjoy it. I think other people enjoy it, too.”

And here’s another Mike Finley story-poem for you to enjoy:

If you want to be considered better than other people,

if you expect to be graded with unusual deference,

if you want your judgment to be considered before that of others,

if you want to effect a commanding air in every situation,

if you want to be believed no matter how many times you have misled,

if you want fame and instant recognizability,

if you want celebrity and a pounding feeling in the heart that holds you dear,

Mike Finley died August 10, 2020 of prostate cancer complications. He connected to Minnesota poetry and spoken word audiences for 50 years. He was editor of the Worthington Daily Globe, and a columnist for St Paul Pioneer Press. He’s written nonfiction books and over 159 digital books of stories and poems. Currently he is retired and dealing with metastatic cancer.  He has posted his life’s work online, all on one page. Enjoy more of Mike Finley’s writing by clicking here. His Twin Cities Pioneer Press obituary is here.