Su Hwang’s Bodega: 7 hints for embarking on the risky adventure of getting into poetry 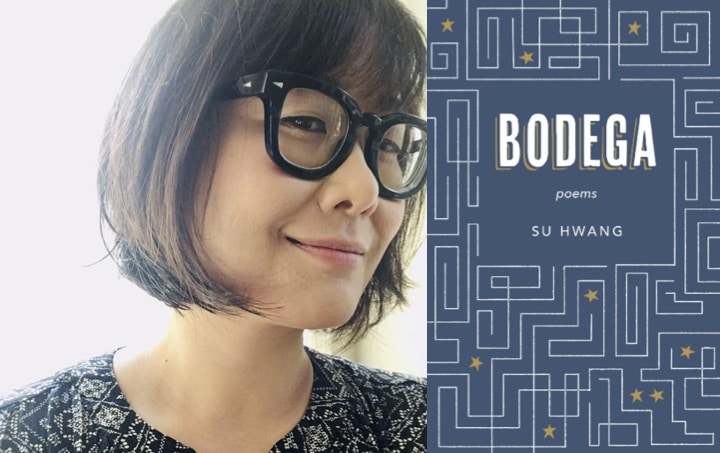 This past week, immersed in the poems of Su Hwang’s Bodega, I felt suspended between immeasurable beauty and ineffable sadness, as if I had fallen into the presence of an unconquerable, fire-breathing truth. Poetry challenges me to see and accept what is, even when it makes me uncomfortable by bringing to light the infinite tensions between hope and grievance. The unsettling awareness of the reality of injustice, which grew in me as I read this book, felt like I was “in a free fall, where up is down & down is up,” (from Su Hwang’s poem “Show Me Where It Hurts”).

Please notice that I didn’t offer 7 hints for “getting” poetry, but rather for “getting into” poetry. Poetry requires a reader’s participation, which is what makes it a risky—and rewarding–adventure.

Poetry isn’t something anyone needs to aspire to “get.” As Alice B. Fogel writes in Strange Terrain: A Poetry Handbook for the Reluctant Reader, “Poetry is art … it’s here to join us on the journey we call life.”

Sitting on your couch and watching a documentary about rock climbing won’t take you anywhere. Putting on the harness and climbing the crag will reveal your strengths and limitations, providing opportunities for growth. Reading poetry isn’t passive. It’s an encounter with your whole self in the world.

Getting into the collection of poems, Bodega, by Su Hwang

Bodega is one of five finalist books chosen by Paige Riehl for Lyricality’s “Read Poetry Central Minnesota 2020” program. Lyricality aims to introduce Minnesota poets to new audiences, and to encourage book groups to consider poetry collections as a way to facilitate lively, meaningful discussions. All of these finalist books provide bridges for novice poetry readers to become enthusiasts. People who read Bodega might gain insight to foster compassion around some of today’s most politically divisive topics.

In a conversation published on Water-Stone Review in September, 2019, Su Hwang writes, “Bodega explores issues of identity, race, im/ migration, and marginalization within marginalized communities. Most of the themes are political in nature because my existence and body have been politicized.”

While the themes may be political, the book is not. There are no proposals of superficial resolutions to American culture’s fragmentation and polarization, no calls to take a side or a stance. There is, however, the invitation and opportunity to observe “where it hurts.”

Su Hwang was born in Seoul Korea. She immigrated to the United States with her parents, and grew up in New York before migrating to California. Six years ago, she moved to Minnesota. Her poems, in the form of stories or narratives, unflinchingly interrogate the myth of liberty and justice for all.

Not everyone wants, or is ready for, their personal fantasy of life to be unraveled by actuality. This is a book for people compassionate enough to say to others, who may come from entirely unfamiliar places, “Tell me where it hurts.” It’s for those humble enough to question their own assumptions, and brave enough to recognize that the world contains pain and trauma they will be incapable of healing. It’s also for those who would like to become more self-aware and accepting of others.

For those willing to take this journey, here are

1) Notice the shape of a poem on the page

Poems look different because they are asking you to read them differently, to get into and inside them. Alice B. Fogel says that reading prose is like looking at your lawn from your kitchen window—you notice it as one thing, an expanse of green. But if you were a bug in that lawn, you’d see a lot of air. In her book Strange Terrain: A Poetry Handbook for the Reluctant Reader, Alice invites you to read a poem as if you were “that bug on a blade of grass. Crawl up one side and down the other of every line.”

Bodega opens with the poem “Something of a Proverb on Luck,” with these lines:

Survey its yarns—
The many threads. We are

Crawl each line. Feel yourself hanging out there, as if at the tip of a blade of grass. Wing your way back to the left margin and crawl again. Notice how, from this perspective, what you just read seems different.

2) Notice what the words of a poem are doing

Poets play with words. Su Hwang noticeably plays with the Korean word Han, giving us 3 different poems with that same title, one in each of the book’s three sections. In section i. she explores Han as a verb. In section ii. Han becomes a noun, and in iii. it’s an adjective.

To enjoy Bodega’s poems, it is not necessary to know that Han is a particularly Korean feeling, which can be described as a permanent emotional imprint rooted in an experience of injustice or unfairness, a sense that one’s tiny but important life is doomed to be consumed by invisible, unconquerable systemic powers. Some readers of poetry, however, will enjoy tackling a new poem as if it’s an expedition or archeological quest. When they make a discovery—of a new word, for example—they’ll bring in a team of experts to shed light on what it could mean. If you’re that kind of explorer, these articles will help you mine deeply, to discover more of Bodega’s buried treasures.

And if you’ve never lived in New York City, you might ask your favorite search engine, “What is a Bodega?”

3) Notice how the words of a poem sound

In the essay “Goatfoot, Milktongue, Twinbird,” Donald Hall explains how poetry touches us on archetypal, as well as deeply personal levels, through the pre-verbal experience of pleasure. You don’t have to understand this to experience it. Forget your need to make meaning for a moment, and simply enjoy the word-music. Mouth the words. Wrap your lips, tongue, and even your throat around this poem’s juiciness.

Pines: her profile scored by fluorescence
Like a knockoff Vermeer. Just as

One of the tools of poetry is image. Poets paint pictures with words.

Solmaz Sharif calls these poems “observant and cinematic.” Read these poems while letting your mind’s eye see a film unfolding. Try that trick with these lines from “Assimilation Bouquet”

Poetry is an exchange. Poets give readers the gift of their words. Readers give a poem their open hearts. A poem is like soup. It’s not quite finished until a reader seasons it with the sweet-hot-salty-sour-bitter flavors of their own emotions.

In Bodega’s Han poems, the poet is signaling that we will encounter the intense, personal and collective emotions brought to the making of these poems. To get into “Han—3.”, is to open your heart to a complex tangle of fear, rage, confusion, stress, curiosity, and bemusement, which crescendo into a commingling of love with misery.

Poetry is also an examination, a testing of our ideas, opinions, and biases. When Su Hwang tells us,“Bodega explores issues of identity, race, im/ migration, and marginalization within marginalized communities,” we can expect to encounter poems that will prod us into thinking about these issues. For readers of poetry, thinking becomes a wonderfully stimulating activity—an intriguing, tickling urge. If curiosity is an itch, thinking is the satisfying scratch.

The long poem “Bodega” is a drama with five characters: the Bodega owners, Mr. and Mrs Kim; a (possibly undocumented) immigrant worker who sweeps floors and stocks shelves; and two customers—a large black man; and a blond white woman wearing a “nice dress.” One of the customers is a thief. “Bodega” shows what’s under the skin of these characters, revealing who is, and who is not, a threat. This poem makes explicit how easily racism can sucker us into misjudging the safety or danger of our encounters with other humans.

The poems of Bodega might confirm or challenge your world view. They might encourage you to think in new ways, even inspire you to change how you live. If you “get into” thinking about these poems, you will be led to consider uncomfortable issues. But you won’t find solutions. Bodega is not a how-to manual for navigating race and marginalization. It is artful, thought-provoking poetry.

“…Bodega is a quarry—mining directly into the immigrant heart, the daughter’s heart, the American heart. Real excavation always rends and breaks and words to bring something new into the light…”—Kaveh Akbar

7) Get into the poem

Trust the poem. Relax into its current. Allow the poem to carry you downstream, taking you where ever it will take you. Experienced readers of poetry accept they might be mystified by a poem, and they make mystification a non problem. Alice B. Fogel calls this way of experiencing a poem, “unknowing.”

She writes, “Tyrannical logic reigns in our daily lives. Also sneaking in frequent appearances is a particular lack of logic we might call stupidity. Poetry’s brand of reason is neither of these. Its carriage of meaning rolls along on wheels of intuition, is-ism, truth and mystery, and what it conveys, even if we can’t name it, is something we cannot sensibly live without…Poetry draws us out of our automatic-pilot, running-around-unsmellingly-through-the-roses and into the physical, messy, exquisite reality of who we are—not what we know or do or what we’re supposed to do next, but what it feels like to a be.”

Try reading Su Hwang’s Pushcart-Prize nominated poem,“The Price of Rice,” to feel what it’s like to be a daughter “always negotiating that emotional space between gratitude and guilt,” as a child of immigrants.

In Water-Stone Review, Robyn Earhart calls Bodega, “startlingly frank and imagistic, tonally compressed, and an absolute must-read.” I agree. I hope you’ll choose to read it.

If you liked these hints, if you feel inspired to become a reader of poetry, I think you will find Alice B. Fogel’s Strange Terrain a must-have addition to your poetry collection.

To Order Bodega by Su Hwang

Bodega by Su Hwang is published by Milkweed Editions, a Minnesota non profit organization with a mission “to identify, nurture and publish transformative literature, and build an engaged community around it.” Lyricality encourages you to support your local independent book seller, or if you prefer to shop online, support this Minnesota publisher by ordering directly from them.

Click here or on the cover image below to order Bodega.

Born in Seoul, Korea, Su Hwang was raised in New York then called the Bay Area home before transplanting to the Midwest, where she received her MFA in poetry from the University of Minnesota. A recipient of the inaugural Jerome Hill Fellowship in Literature, the Academy of American Poets James Wright Prize, writer-in-residence fellowships to Dickinson House and Hedgebrook, among others, her poems have appeared in Ninth Letter, Water~Stone Review, Waxwing, and elsewhere. She teaches creative writing with the Minnesota Prison Writing Workshop and is the co-founder, with Sun Yung Shin, of Poetry Asylum. Su Hwang currently lives in Minneapolis.