Love Will Lead You Home 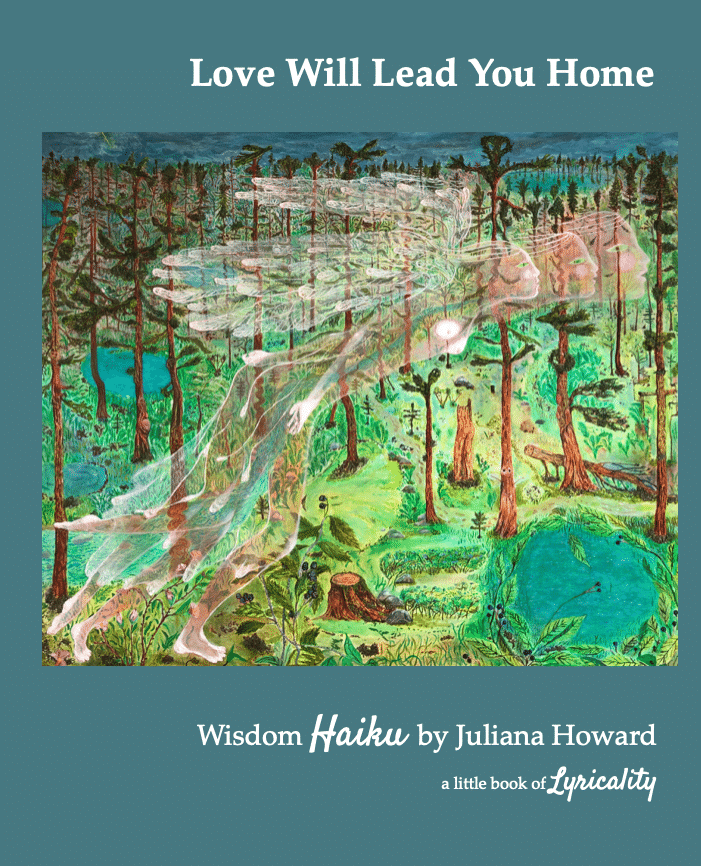 Love Will Lead You Home

and slow pace, as a meditative practice.

Breathe in love; breathe out peace.

Give this little book of wisdom to someone you love.

Give yourself the gift of wisdom haiku.

order on Amazon for $8–by clicking here

Love Will Lead You Home: Wisdom Haiku by Juliana Howard

Juliana Howard has galloped through life on the back of her muse. She attributes her grit and gusto to her Montana upbringing. Though raised in Montana, she went to colleges in Minnesota, Carleton and the University of Minnesota. She has performed political and social satire and was featured twice in the Star Tribune. In her 50’s she returned from teaching to devote her time to writing children’s spiritual songs, which were performed locally and nationally and recorded by The Crayons. She now lives in St. Joseph, MN with her husband of 62 years, where she composes poems and manages the “Cultural Connections” column in the Newsleader of St. Joseph, as part of Cultural Bridges.

Sophia writes, “I grew up on a farm in central Minnesota and got to participate in restoring much of the land back to native prairie. Watching it change over the years, getting richer and fuller and repeatedly hearing those words “back to native prairie” made me aware from a young age that my home did not always look this way and that my ancestors have not always been here. American landscape painting, along with American History, has for the most part ignored thousands of years of indigenous human history, acting as though this land was ours to tackle and overpower. Art history has also significantly overlooked the 200 million-some years of stories within the land itself before people ever stepped foot on the Americas. How did nature act before we were here? Will it ever look that way again?

“I flip the roles in my paintings, daydreaming of a time and place outside of human hegemony. In this post-human America, the plants and landforms are characters, able to express themselves after hundreds of years of White (European) dominance. Their movements are those of freedom and festivity. Trees high-five each other knowing they are finally liberated from human devastation. Smoke floats like reaching arms across borders that no longer exist. Rain clouds release drops into a lake, creating towering columns between heaven and earth. The paintings are from a bird’s-eye view, or the perspective of a cloud or spirit, hovering somewhere outside of human perception and dominion.”

With a BFA in painting from Rhode Island School of Design, she has exhibited in numerous shows since 2012, most recently in the show Refugia, curated by Amelia Bewald for The Royal Society of American Art.